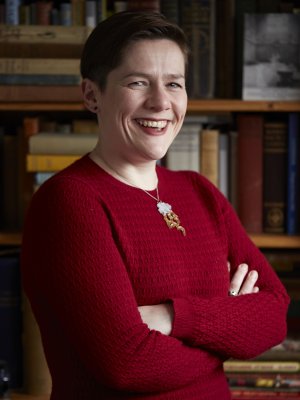 Dr Annie Gray is one of Britain’s leading food historians, specialising in the history of food and dining from c.1600 to the present day. She is an author, broadcaster and consultant.

She has published four books, The Greedy Queen, The Official Downtown Abbey Cookbook, From the Alps to the Dales – 100 Years of Bettys, and most recently in 2019, Victory in the Kitchen – The Life of Churchill’s Cook, a biography of Winston Churchill’s longest-serving cook and an in depth look into the most crucial members of the Churchillian support team. Annie has also written for publications such as Delicious Magazine, The Telegraph, The Guardian online and BBC Good Food.

Annie has worked widely across both TV and radio and has been the resident food historian on BBC Radio 4’s award-winning culinary panel show, The Kitchen Cabinet, since its inception in 2012. She was a consultant and presenter on Victorian Bakers (BBC Two) and The Sweetmakers (BBC Two) and has appeared and consulted on A Merry Tudor Christmas with Lucy Worsley (BBC Two) and Victoria and Albert: The Royal Wedding (BBC Two), as well as appearing on James Martin’s Saturday Morning (BBC One), James Martin: Home Comforts (BBC One) and The Great British Bake Off (BBC) among others.

Annie has given numerous talks around the UK for clients such as the Historic Royal Palaces, The National Trust and Morley Arts Festival. Some of her previous talks include Cuckold’s Delight and Mother’s Ruin: a history of gin in England, Dining at Downton: cooking and eating in the early twentieth century country house, Christmas Dinner: from Edward I to Edward VII and To please the palate, charm the eye: 400 years of food as edible art.

Annie is available for lectures and talks, Q&As and to design historical menus.

The talk was great and we’ve had some really excellent feedback, please pass on our thanks to Annie!”

Just wanted to say a huge thank you from all of us for such a lovely, energetic talk this afternoon. We all really enjoyed it and judging by the comments during the talk it seems like our audience was equally charmed!