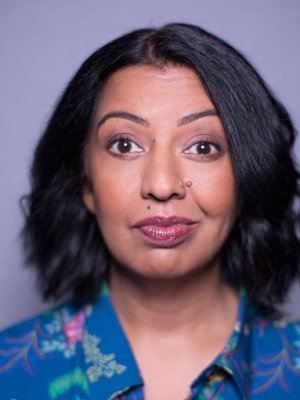 Isma Almas is British multiculturalism at its best: Bradford-born and a childhood split between Pakistan and Yorkshire. Isma’s comedy is fused by her unique take on life as a British Muslim woman.

She is a regular on the comedy circuit across the UK, and has performed solo shows at the Edinburgh Festival Fringe, London’s Barbican Centre for Stonewall, Bradford’s Literature Festival and on a raucous luxury gay cruise around the Med!

As well as winning The First Laugh at Sheffield Comedy Festival, Isma was a semi-finalist in So You Think You’re Funny and made it to the final of Funny Women. She spent six months co-presenting the mid-morning show on BBC Radio Leeds, where interviewing a number of famous names.

With an academic background in Social Sciences and Social Work, Isma’s career outside of comedy has included working in a forensic unit for those with significant mental health problems as well as managing independent fostering agencies. Isma has three children of her own, the youngest of whom is adopted.