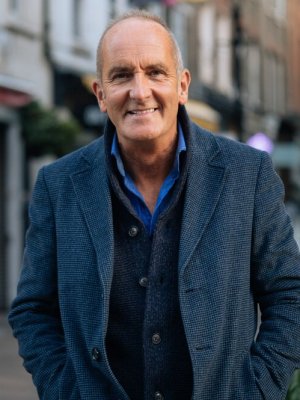 Kevin McCloud is best known for the internationally acclaimed series Grand Designs, which has been running on Britain’s Channel 4 for 15 years. It is now shown around the world, and the accompanying magazine and Grand Designs Live exhibitions reach an ever bigger audience each year. In 2015, Grand Designs was awarded the BAFTA for Best Feature.

Kevin’s other TV work includes two series of Man Made Home, Kevin’s Supersized Salvage and Kevin McCloud’s Escape To The Wild (Channel 4). He wrote and presented his four-hour Grand Tour of Europe and spent two and a half weeks in the slums of Mumbai for Channel 4’s 2010 India season.

He has presented three series of Grand Designs: House of the Year (Channel 4), which has seen him visiting cutting edge new homes across the country all in the running for the prestigious RIBA House of the Year award, to discover what it takes to be crowned the winner.

Kevin also broadcasts extensively about design and architecture, including regular coverage of the pre-eminent UK architectural competition The Stirling Prize. He has written several books and many more articles and champions sustainable development, context, the historic environment and ecological construction. He believes that the best architecture relates to where it is, as much as who it is for. This is a philosophy enshrined in his development company HAB Housing, which is now building homes and shaping communities towards a One Planet Living way of life.

Kevin studied History of Art and Architecture at Cambridge, is an Honorary Fellow of both the RIBA and the Society of Light and Lighting, a fellow of WWF and a recalcitrant patron of a handful of organisations. His two ambitions remain to entertain and to make the built environment better – and consequently ‘make people feel better’.

Further to the resounding successes of the event, and on behalf of the team, I would like to express our thanks for your own kind contribution on the day. We have been delighted with the achievements across the show, and in particular with the part your conference played in ensuring a lively, interactive, thought-provoking and informative experience.

The event was a complete success; nothing but fantastic and positive feedback. Having Kevin there, presenting his expertly well constructed view of Rome in architecture and how it has influenced other buildings worldwide, was a highlight for many. It was a great way to kick off this event. Not only that but Alex and he hit it off which made it easy to create the final presentation piece. Again, many thanks!

Kevin was brilliant, absolutely charming to everyone he met?and his speech was just right, amusing but also plenty of serious content, discursive but never off point and generally highly entertaining