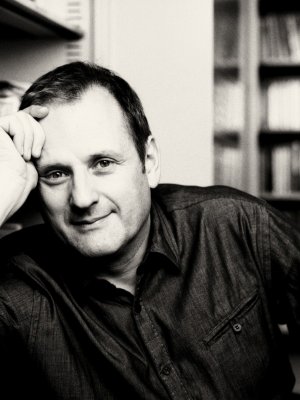 Mark Radcliffe has been one of national radio’s most respected and distinctive voices for more than two decades.

One half of BBC Radio 1’s semi-legendary Mark And Lard, he hosted the Breakfast Show, after which he presented the afternoon programme for almost seven years.

Mark won a Sony Gold Award for ‘Music Broadcaster of the Year’ in 2009.

Mark’s many TV appearances include hosting the Glastonbury Festival for BBC2 as well as being host of the seminal Channel 4 music programme: The White Room.

Mark is also a published author having his debut novel Northern Sky released in 2005, and his memoir Showbusiness – The Diary Of A Rock ‘n’ Roll Nobody was a massive seller in 2002. He has also released five albums with his bands, The Shirehorses and The Family Mahone.

The event was really good and Mark was fantastic as usual.

Mark is an absolute star; extremely professional with a great sense of humour and warmth. He gauged the tempo and mood of the audience and was spot on with his timing and adlibbing. Mark is extremely easy to work with and has a natural ease and grace when presenting as well as chatting away to others. The feedback we have had about him is fantastic and he is clearly held in high regard by many. Mark is an absolute pleasure to work with and I can?t recommend him highly enough.

The event went extremely well thank you and Mark was fantastic! It was the best one yet so the client was delighted!