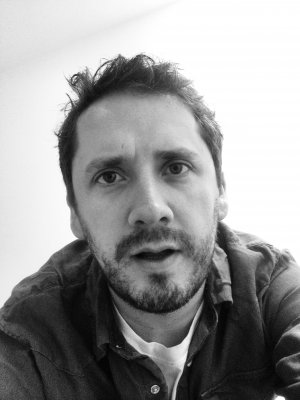 Nat Saunders is a writer, performer, host and video maker extraordinaire. He is the creative director at stolen pictures and in 2019 he wrote Truth Seekers with Simon Pegg for Amazon.

He began his illustrious career writing for such comedy masterpieces as Smack The Pony and Big Train, before branching out into performance and film-making as well. He is one half of duo Worm Hotel, who have made countless weird and wonderful sketches which you can see here, and together they created the global phenomenon that is Misery Bear the saddest, loneliest teddy bear in the whole world, who happens to have met the likes of Mo Farah, Lionel Richie and Kate Moss during his escapades.

He and his writing partner Chris Hayward have also had two original script commissions in the US, with network giants FOX and CBS, and have just finished filming their own movie/series SOS: Save Our Skins for Fearnet, BBC Worldwide, and the BFI (US, Canada & UK co-production), which they co-wrote and co-star in.