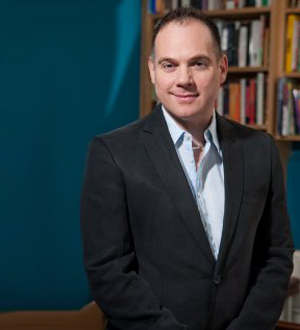 Paddy O’Connell is a national and international broadcaster whose innovative style has led him into some of the most varied projects on radio and TV. From Wall Street and 9/11 to the Eurovision Song Contest, Paddy has defied the conventional roles.

On Radio, he hosts BBC Radio Four’s Sunday morning programme Broadcasting House, and on TV his programme Weekend World is seen weekly on BBC World News by 175 million viewers. He is also a regular stand-in on the Jeremy Vine Show on BBC Radio 2.

He’s the London correspondent for US Public Radio programmes, The Takeaway and “The World,” and has lived and worked in the USA extensively. He was an intern during the presidency of Ronald Reagan, and was in New York as a Wall Street Anchor during the attacks of 9/11.

Paddy is also well-known as the host of many public events, from monthly public “Question Time” events in London, to informal briefings for visiting Americans hitting the theatre scene. He has a long list of appearances and meetings to add to his unusual mix of interests. He is well-known to the London journalist hub the Frontline Club, hosting monthly events there. Paddy has also hosted Eurovision events in London and Oslo, and chaired events from Ohio to Singapore.

As well as being a fantastic host for an array of corporate events, Paddy is a witty and erudite after dinner speaker recounting tales of his time in the US, presenting the weird and wonderful Eurovision Song Contest, how to fix football, and insights into the life of a broadcaster and journalist.

Paddy is also involved in charitable work providing pro-bono work across a wide spectrum, from Prison Radio to school mentoring, and is a regular volunteer in the field of community projects.

Just a very quick note to say a huge thank you for the tour de force yesterday lunch time. It was lovely to meet the voice in person and we were thrilled with the reaction you generated. Lots of rave reviews. Thank you from all of us. We enjoyed meeting you and very much hope we can persuade you to work with us again sometime in the future.

It was good to meet you yesterday at the Communications and Marketing Conference. Thank you for speaking, your time and input were very much appreciated and contributed greatly to the success of the conference.

Paddy really did meet our expectations as a guest speaker. He followed the brief that we set for him and was careful to research our sector and tailored his presentation accordingly. Here are some comments from delegates who attended the session:
Paddy O’Connell was my favourite speaker of the whole day. I found him extremely engaging and I thought his view of Comms from a journalistic point of view was very interesting.
It was good that Paddy was on at the end of the day as his session was quite light hearted for those who were growing a little tired. [He delivered] a fun and engaging session full of useful insight and tricks of the trade.
Paddy was brilliant his presentation was great – he engaged with everyone. He was utterly brilliant, so much more interesting than the usual housing people.

Paddy, Thank you for running the Britain Now session with our guests from The Goodman Theatre…The group really appreciated the insights into current political affairs and international relations with the USA…Thanks again for your time.

Thank you so much for your input to the awards last night. The emails have been coming in thick and fast this morning! I appreciate it was a job of work for you, but you really threw yourself into things and got everyone into the right frame of mind.

I wanted to write and personally thank you for your support at our dinner with James Corden. We were delighted when we heard that you were going to be there for us…you were a star. You pulled it together and created a great atmosphere.

I think you handled James and made a huge impression on the guests and the feedback has been amazing.

Just wanted to drop you a line to say a huge thank you for being our chair at last night’s event, it was absolutely fantastic and I continue to receive nothing but positive comments so far from those who have attended, we have definitely raised the bar for future events at CWR!