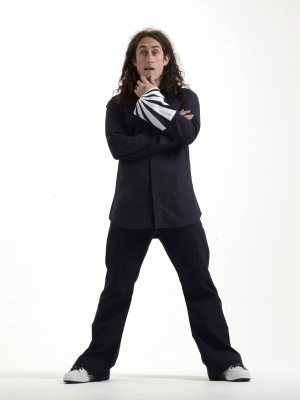 Geordie Stand-Up Ross Noble has been performing since he was smuggled in to his local comedy club at the age of 15. Licensing laws meant that immediately after his slot he had to leave through the kitchen – but he has never looked back.

In the past years since, Ross has become known as a truly exciting and genuinely original performer and has received huge critical acclaim. He is a former Perrier Award nominee, Barry Award, and Time Out award winner for best live stand-up, and has won countless other prestigious awards and nominations. Ross was voted 11th in the 2010 Channel 4 poll of the 100 Greatest Stand Ups of all time.

Ross rose to mainstream popularity through making appearances on television, particularly interviews and on celebrity quiz shows such as Have I Got News For You. He has also released DVDs of several of his tours.

Ross toured his solo-show Things in 2009, taking the show to the Just For Laughs Comedy Festival in Toronto and Montreal, on a UK Spring Tour, an Australian Tour and a six-week run in London’s West End. He followed this up with a UK tour of Nonsesory Overload in Autumn 2010.

Ross Noble is now perhaps the most successful cult comedian of our time, with a loyal fanbase derived largely from the ‘word-of-mouth’ recommendations of those having seen him perform live. Available to host and perform at a wide range of corporate events, Ross would liven up any awards ceremony, office party, or corporate dinner, making it a fun-filled night to remember.

The night was fantastic, really well received by everybody here at MML…The Ross Noble ‘surprise’ worked really well, a lot of people have said that it is someone that they would have loved to have seen but have not had the ability to do so exactly what we want to achieve from the evening. So, all in all, another very successful evening. Thanks for your assistance and cooperation in the planning stages.