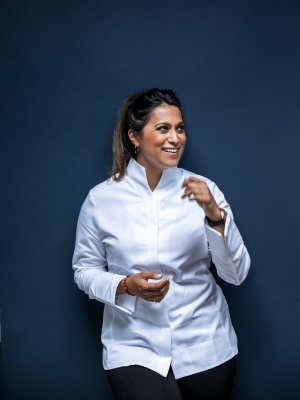 Sabrina Gidda’s early career began in Fashion PR & Marketing – before realising that her passion was in food and cooking. Having had no formal training, she began as a stagier at The Dorchester hotel, ran two successful gastro pubs before taking over The Sanctuary Spa Covent Garden. She then ran kitchens in numerous firms in The City as Executive Chef. Her eclectic journey to the kitchen was driven by dedication to her craft, unbounding ambition and the desire to work with food.

She went on to open Bernardi’s Restaurant in Marylebone and was instrumental in their culinary accolades. It was here that Tatler Magazine awarded her ‘Rising Star’ in 2016 for her inventive, unrestricted approach to Italian cookery. Bernardi’s was mentioned in both Michelin Guide’s during her tenure, along as being noted as one of the best Italian Restaurant’s in London by both Conde Nast & Square Meal.

Throughout her journey Sabrina has regularly been asked to combine her love of writing and cooking – to contribute recipes to numerous magazines. Her approachable and innovative style of cooking – makes her recipes easy to follow, and most enjoyable to eat. Over the years Sabrina has contributed to various editorial publications along with appearing as a judge on Masterchef, and herself competing in Great British Menu – earning 10/10 on her fish dish from acclaimed Chef’s Paul Ainsworth and Daniel Clifford.

Sabrina was Executive Chef of AllBright – a women’s members club based in London & Los Angeles. Her work at the club has been instrumental in raising the profile of the clubs hospitality offer – along with partnerships with BMW, Belu Water, Tiffany, Water Aid and Women for Women.