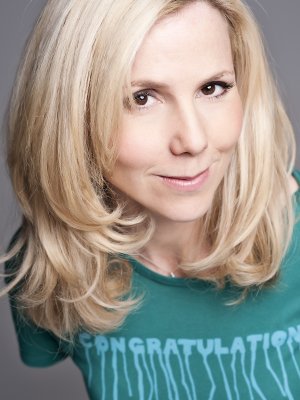 Sally Phillips is a comic actress and writer.

Listed in The Observer as one of the 50 funniest acts in British comedy (2003), she is instantly recognisable forces behind Channel 4’s award-winning comedy sketch show, Smack the Pony.

From I’m Alan Partridge to Hippies, Green Wing, Miranda, Parents and Veep, Sally has been a near-constant comic presence on British television.

She has also starred in three Bridget Jones films and The Decoy Bride, which she co-wrote.

Sally has played the eponymous character Claire in Radio 4’s award-winning sitcom, Clare in the Community, since 2004.

In 2016 she fronted a documentary A World Without Down’s Syndrome? (BBC2), exploring the ethical implications of our national screening policy. It was nominated for the Radio Times Readers Awards.

Sally’s intelligence, talent, and razor-sharp wit make her perfect for a range of corporate events.

Sally was born in Hong Kong. Her father, Tim Phillips, was the Chairman of the All England Lawn Tennis and Croquet Club, who host The Wimbledon Championship. She graduated from New College Oxford, where she read Italian, with a First Class Honours degree.

On behalf of all of DG Publishing, I would like to say a massive thank-you to Sally for being an excellent host last night! She put in a lot of effort to personalise her script for our audience, and was excellent overall and very personable. We were all very pleased!

Where to start with how grateful we are to Sally. Not only did she battle the elements to get there she made this year’s comedy session the best ever. She was the perfect combination of being very funny and also managed to get across all key information. The panellists felt comfortable and relaxed in her company. And she asked fab questions… it was just a joy to watch.

I’d love you to pass on my sincere thanks to Sally for the funny, insightful, controversial (just the right touch of!) and professional job she did at the Business Culture Awards night. People were talking about her being part of it in the run-up and afterwards and we can’t ask for better than that. And somehow, she even managed individual chats with people, including in Italian!

Sally was a pleasure to deal with, easy going and down to earth. Her speech was well received, and she made us laugh, was really pleased with how she came across and enjoyed hearing her stories, she was open and honest, hearing her talk of her son is inspiring on so many levels.

Sally did an absolutely amazing job and is a complete pleasure to work with, I would recommend to any one and use her time and time again.

The day went wonderfully. Sally was a superstar. She was great on Sky News and was loved by literally everyone at the awards ceremony. She was not only funny but was able to reach out to all the winners and highly commended finalists and make them feel special. Sally stayed around and spoke with many of the winners and finalists.

A huge thanks for hosting the awards last night – we loved having you (our first ever woman presenter)! The script was great, super funny and hope you enjoyed yourself as much as we did and everyone else in the room.

Product of The Year 2019 Awards

Sally was great on the night, got involved with the audience and made her content personalised to the company which is always a massive bonus!

Sally was AMAZING! She was so good and the audience loved her. We have received glowing feedback from the evening including Sally so thank you so much. Please pass on our thanks again to Sally as well.

I would like say ‘thank you’ for doing a great job at the Kimberly-Clark Professional Golden Service Awards last Thursday. It was a real pleasure working with you and I really appreciated how you made everyone feel at ease (including myself) and able to really enjoy their moment up on the stage. We had many people mail us and say the Golden Service Awards were a great event and that you really made it for them. The fact that you allowed time for photographs was the icing on the cake for the people attending and it made a great day even more special for the winners. Not everyone would do that so you support here was extra welcome.

Just a quick note to say thanks for facilitating our day with Sally yesterday. She was so lovely, funny, kind, and generous with her time, and positive comments. We couldn’t have asked for a better host. Please pass on our thanks.

A quick email to say how much I enjoyed working with you on Tuesday. I think we had a great rapport on stage and we have had terrific feedback from the guests who all loved you – so much for a difficult audience, you had them eating out of your hand!

Absolutely glowing feedback on Sally and they would like her next year! Please pass on our thanks.

The Awards went really well and Sally did an incredible job! She was engaging, witty and really lifted the event with her presence and humour – I heard so many positive comments from guests about what an amazing job she did. As well, there were quite a lot of people who were quite excited to meet her and she was very patient and kind with them. And we very much appreciated how she conveyed the importance of work in the public sector. Please pass on our sincerest thanks to her. We couldn’t have been more pleased.

She did an excellent job and everyone was very impressed! The bespoke material she wrote went down very well with our audience and we’re delighted with the feedback we’ve received.

I just wanted to say that Sally was amazing and we totally love her. Thank you so much for recommending her. If you could please tell her I said thank you and she did a fabulous job, I would really appreciate it.

Sally was great today. She got straight into the swing of it and it worked really well! I’d really like to work with her again on another project if something suitable comes up that she’s interested in too!

Sally was really lovely and did a fantastic job. I think we all really appreciate it when someone has done their research and tailored their warm-up to the event and the crowd. I loved her Charity Shop theme; perfect concept and hilarious in parts. Sally was so very refreshing as our host this year and went down a treat! I had time to chat to her at the beginning and the end, and she?s a very lovely warm person, so I think we chose very well in host this year. Do pass on my thanks and best wishes.

Sally, I wanted to take a moment to once again thank you for your hosting efforts at the UK Agile Awards. I am struggling to find the right words here to let you know how impressed I was, and in fact we all were, with your performance and in particular with the level of effort you invested to ensure you incorporated the interests of our audience. It was clear that you went well beyond the briefing that had [been] provided to do your own research on the Agile community. The results were fabulous. Sally, and I am sincere in this sentiment; your professionalism, the graceful nature with which you conducted yourself, and the overall way you did your job that evening was inspiring. Thank you again for helping to make our night a great success.

Been to many awards events in life. Best ever, funniest host: actress Sally Phillips! She should run the FCA.

Sally was amazing tonight. Thank you to you and the team and to Sally for making this a cracking awards. She was great!!