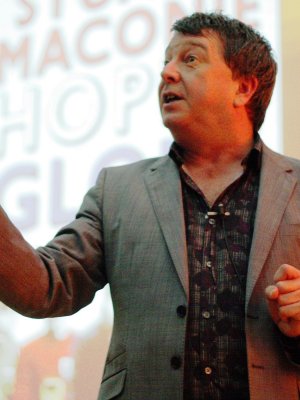 Stuart has written a series of critically acclaimed books, the most recent being Hope and Glory: The Day’s That Made Britian. His previous work, Adventures On The High Teas: In Search of Middle England was the Sunday Times Bestseller and made Times Book of the Year. His previous travel book Pies and Prejudice: In Search of the North has sold over 250,000 copies and counting, and was nominated for the Portico Literary Prize. (These two have helped to make him Britain’s best-selling non TV tie in travel author.)

Stuart has been a regular voice on the wireless for many a year: hosting Radcliffe and Maconie with Mark Radcliffe on BBC 6 Music every weekday at 13:00 – 16:00; The Freak Zone on 6Music every Sunday afternoon; and deputises regularly for people on Radio 2 and 6 Music. He has previously written and presented several long-running shows including All Singing, All Dancing, All Night about one of his abiding passions, Northern Soul, and Seven Days That Rocked The World, as well as regularly presenting documentaries for Radio 4. He’s no stranger to a big event, interviewing Sir Paul McCartney at The Electric Proms and presenting the accompanying TV show, and hosting shows from the Cambridge Folk Festival, South By South West and Latitude.

His TV credits include: presenting the BBC’s On Trial shows, Pop On Trial and Style On Trial; Stuart Maconie’s TV Towns, a popular gazeteer of major British cities and their roles in modern cultural life for ITV 4; and The Cinema Show/DVD Collection on BBC 4. He is currently hosting Inside Outon BBC 1, which transmits at 7.30pm on Monday nights. He won Celebrity Mastermind in 2009, and was recently seen on the victorious side for the Children In Need special of Only Connect and made his debut on Have I Got News For You.

He has hosted BBC 2’s Edinburgh Festival coverage, and appeared in Phoenix Nights and Max and Paddy. He has aired his views on The South Bank Show, and cropped up now and again on Never Mind The Buzzcocks. He was recently on BBC 1’s The Meaning Of Life, and on BBC 2’s Grumpy Guides. He was a stalwart of the popular BBC2 series I Love the 1970s and I Love The 1980s, and Channel 4’s Top 100 whatevers, which he has also written for.

Stuart wrote and starred in the Times/Heat/Independent/Mail/Guardian Critics’ Choice Lloyd Cole Knew My Father on BBC Radio 2 and at the Edinburgh Festival and the ICA. His co-stars and co-writers were his long-time colleague Andrew Collins and fellow NME alumnus David Quantick.

Stuart writes for various papers and magazines, and has a column in The Radio Times and writes for Word, The Times and The Guardian, and has written two music books; the official biographies of Blur and James.

Stuart began his professional writing career when he decided to stop teaching English and sociology in Skelmersdale. All this and more is detailed in his brilliant first book of memoir Cider With Roadies.
Stuart was the last North West Development Association Ambassador for the region. He has walked all the Wainwrights, and his hobbies also include drinking and reading slim volumes of difficult modern verse.

I would like to thank Stuart for a great performance last night. He did an excellent job; he was extremely professional, flexible and of course entertaining. There were lots of laughs from the audience which was good and I think he hit just the right tone. We have received lots of positive verbal feedback. It was really nice of him to join us for the reception after the ceremony, at one stage he was surrounded by about 8 people (fans!). He was very accommodating giving an interview on the red carpet and getting in a few photos for guests.

Stuart Maconie was approachable and was keen to learn about the event he was presenting. His hosting on the night was first class, which helped create a memorable event.