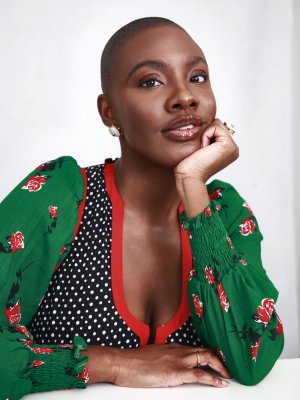 Yomi Adegoke is a multi-award winning journalist, presenter and social commentator best known for ‘Slay In Your Lane: The Black Girl Bible’ which she co-authored in 2018.

She was named one of the most influential people in London by the Evening Standard, as well as winning the Groucho Maverick Award and the Marie Clare Future Shaper award. The follow up companion ‘Slay In Your Lane: The Journal’ came out in 2019 and the anthology book ‘Loud Black Girls’ was released in 2020.

In recent years Yomi has become one of the country’s leading voices on race, feminism and pop culture and how they intersect, as well as class and politics. She’s also known for critiquing dating and relationships, reality TV, art, music and culture.  In 2021 Yomi was named in the Forbes 30 under 30 list for Media and Marketing.

Yomi presented ‘Where are the black women in Grime?’ a BBC Radio 4 documentary and co-hosted a BBC Radio 6 takeover for Black History Month. She has been a regular guest on Sky, ITV news, and BBC Radio 4. She writes a weekly column on reality TV for The Guardian and has a monthly column at both British Vogue and the i paper. Yomi also writes regularly for The Washington Post, Vice and Elle amongst others and has been nominated for two British Journalism Awards and a total of five Comment awards.

Yomi has spoken at numerous literary festivals and appeared on various prestigious panels at events for Guardian Fresh Voices, The British Library and Intelligence squared among others.

She is a trustee for the charity Arts Emergency, which helps make the creative industries more accessible to marginalised young people and an ambassador for Eve Appeal, the leading UK national charity funding research into gynaecological cancer.

Yomi was absolutely incredible and insightful. The feedback has been amazing. We appreciate it very much! Please send along our gratitude!

Yomi did a fantastic interview and Q&A and we have had some incredibly positive feedback regarding her session and the event. Please pass on our thanks to Yomi.