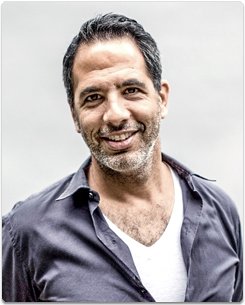 Yotam Ottolenghi is the restaurateur and chef-patron of four London-based Ottolenghi delis, as well as the NOPI and ROVI restaurants. He is the author of seven best-selling cookery books which have garnered many awards, including the National Book Award for Ottolenghi SIMPLE which was also selected as best book of the year by the New York Times.

Yotam has been a weekly columnist for the Saturday Guardian for over thirteen years and is a regular contributor to the New York Times. His commitment to the championing of vegetables, as well as ingredients once seen as ‘exotic’ has led to what some call “The Ottolenghi effect”. This is shorthand for the creation of a meal which is full of colour, flavour, bounty and sunshine.

Yotam has made two Mediterranean Feasts series for More 4, along with a BBC 4 documentary, Jerusalem on a Plate as well as numerous guest appearances. He has also appeared as a guest judge for a week on MasterChef Australia.

He lives in London with his family.